One of Kono Seisakusho's representative products is our 30Ð diameter (0.03mm) surgical needle--the smallest in the world.
This product, developed in 2004, has received high praise from physicians engaged in micro-surgery, wherein blood vessels and nerves are sutured using 3-20x microscopes.
At the time of its development, the conventional wisdom was that a needle smaller than 100Ð (0.1mm) could not be created.
Areas which required needles of 100Ð or smaller were recognized as being "villages without doctors" and inoperable.
Under these circumstances with a strong demand from doctors working in the field, we started development under "Medical-Engineering Collaboration".
Although we anticipated considerable hardships in developing a product that went so far beyond what was thought possible at the time, the reason we decided to attempt it was that we wanted to create a surgical needle that would conquer the "villages without doctors" in micro-surgery with our own hands.
We wanted to create a product that could save the minority of patients such infants and those with rare diseases, leaving none behind.
Developing and producing the world's smallest needle at 30Ð (=0.03mm) required production facilities that could achieve extreme accuracy.
However, at the time we did not possess the precision production equipment that we have today.
Since this was a field of uncharted territory, of course there were not any manufacturers of production equipment we could order from either.
And so we had to literally start from nothing to create the tools, production equipment, and testing equipment all in-house. 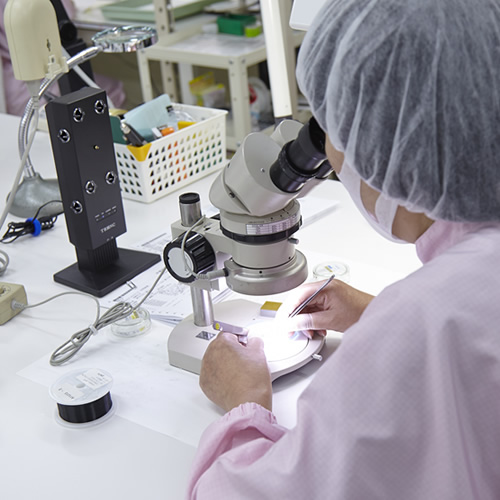 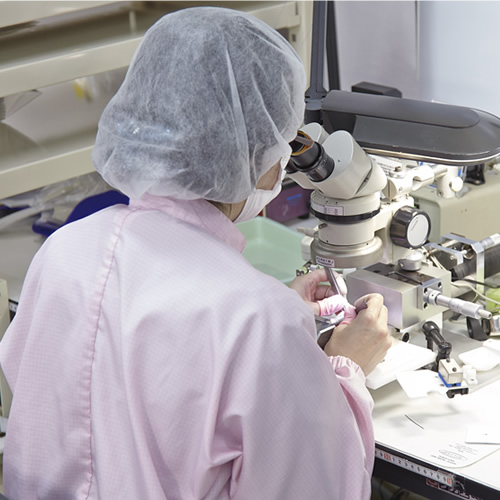 It was also a difficult process to select the materials.
Because surgical needles for micro-surgery penetrate blood vessel tissue, they could be called the ultimate cutting tools.
Because they are used for suturing, they have to be not only thin but also sharp and rigid to avoid bending when suturing.
However, the need for rigidity made the production process even more difficult, so we struggled to find the right balance.
In needles and thread used for micro-surgery, the needle and thread are connected with one another.
Traditionally a laser was used to create a depression in the tail of the needle, and a technique was used to connect it to the needle there.
However, due to how small the 30Ð needle is, the irradiated heat from the laser would melt the metal itself, creating difficulties.
We then had the straightforward idea for a method to make a shallow cut in which we interposed the thread and re-closed it in order to fix it in place.
We also have a story from a short time before we developed the 30Ð needle, when we were created a 50Ð needle.
At that time, a gifted artisan was responsible for the micromachining to open a hole to fix the needle into the thread.
Unfortunately, he was taken ill.
It was then that we keenly realized that while "feeling" is important in production, "quantification" is also important.
Rather than simply performing advanced machining by "feeling", it is better to "quantify" and establish the manufacturing method as much as possible.
Doing so avoids the risk of relying too much on the skills of a few artisans.
Today we make use of that experience to consider hybrid production which combines "feeling" with "quantification".
Ideally, anyone should be able to produce a product that meets standards as long as they have the appropriate skill and production equipment.

The time period when we were developing the 30Ð overlapped with the time when the alternation of generations was underway.
At the time of the development, the engineers in their 60s and 70s were the so-called artisans. Telling the younger generation to "watch and learn" was the mainstream style, and the techniques were not passed down properly. With this, when the craftsman retired, if the superior technology ceased, I felt a sense of crisis.
In order to solve these problems, engineers of generations from thirties to fifties have become the focus, analyzing the superior technology of craftsmen, and starting efforts to advance mechanization. This effort succeeded and once a fine needle that a skilled craftworker honing technology for 30 to 40 years produced at a success rate of about 10% is now produced at a success rate of about 98% even by ordinary staff Production efficiency is increasing until we can.
Just the other day, we have just completed the robot arm type manufacturing equipment we have been developing our own company aiming at further improvement of quality and production efficiency. The body of the doctor who handles the tool and the body of the patient who will touch the tool directly will differ personally. Since it is expected that these needs will become more diverse in the future, it is imperative to raise the technology to produce products with custom-made products. We hope to automate craftsmen's skills in a good way and continue to support the "next generation" reliably, which has been supporting "multi-product small volume production". 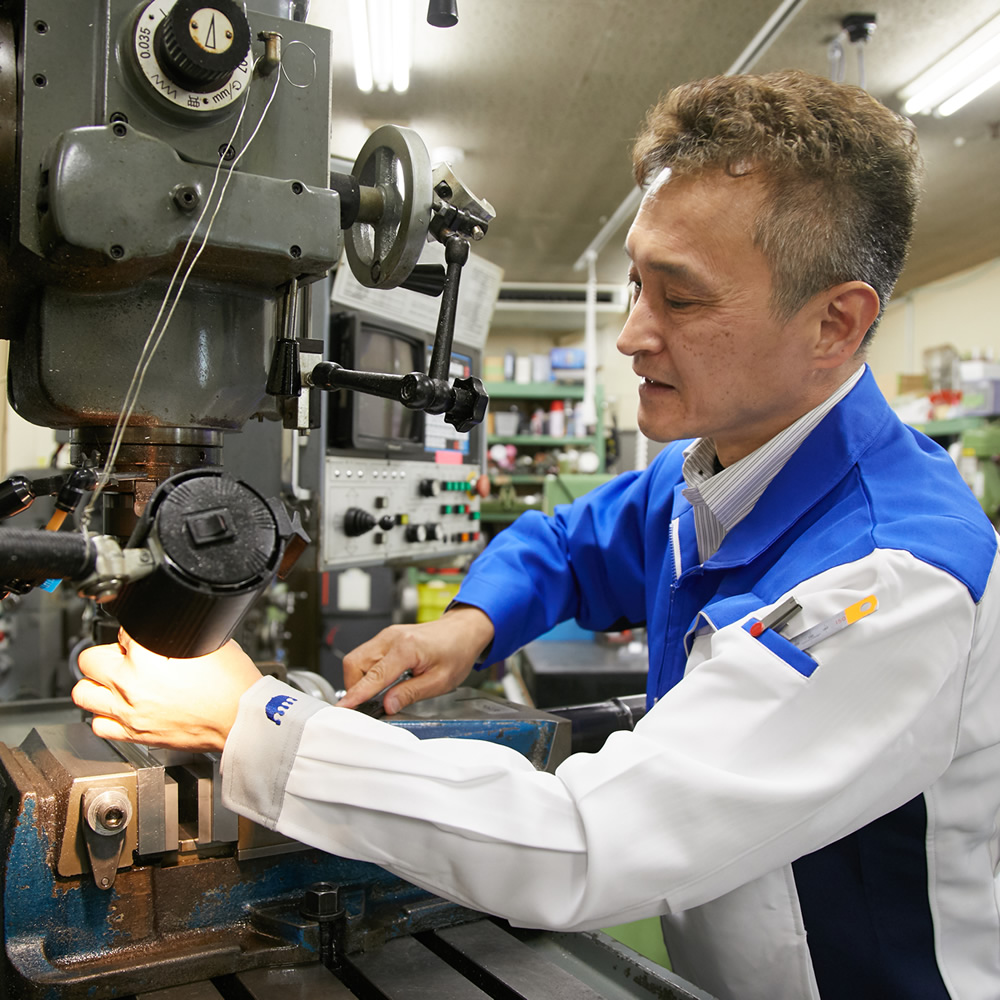